Listen up, Padawans. Are you anxious to get a kickstart on your Jedi apprenticeship but finding yourselves at a loss without any new "Star Wars" movies to flock to? Well, just because the next "Star Wars" trilogy won't be out for a long, long time (with a release date far, far away) doesn't mean we can't start talking about it now!

As you all know, the "Star Wars" universe is pretty expansive to say the least. Hell, there are "Star Wars" characters that you've never even heard of before that have Wookieepedia pages longer than the fall down a Sarlacc Pit. That being said, this week's edition of "Star Wars Spotlight" focuses on a character that isn't quite so well-known but, in fact, has a long-standing rivalry with Boba Fett, Han Solo, Chewbacca, and even (to a lesser extent) Luke Skywalker: Bossk the bounty hunter. 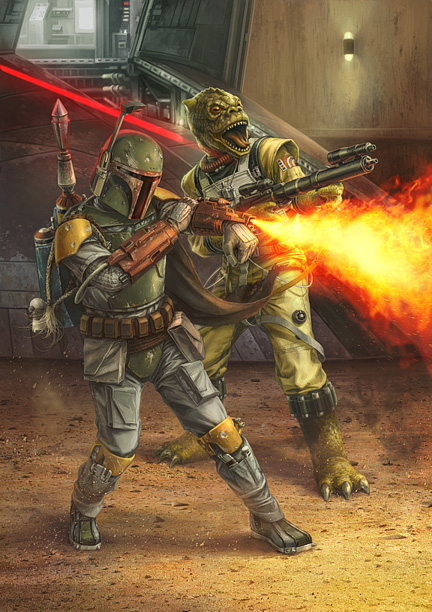 Born in 53 BBY (Before the Battle of Yavin) on the planet Trandosha, Bossk (which translates to "Devours His Prey" in Dosh) is one of the most feared bounty hunters in the entire galaxy. Within the first few minutes of his life, Bossk committed his first multiple homicide; devouring the rest of his siblings before they could hatch. His father, Cradossk, was known as the leader of the Bounty Hunters' Guild before Bossk stabbed him to death with an ornamental dagger and ate him; usurping his position as the head of the Guild Reform Committee.

Bossk began his hunting career by killing and skinning Wookiees in and around the Kashyyyk solar system; a feat considered suicidal to most species. This, of course, would eventually put him in direct contact with Chewbacca and his soft, fleshy partner Han Solo. After Han and Chewie destroy Bossk's ship by landing the Millennium Falcon directly on top of it, Bossk declares them his sworn enemies; which explains why he shows up to collect Solo's bounty in "The Empire Strikes Back."

As mentioned earlier, Bossk shares an intense hatred for several of the most popular "Star Wars" characters. In fact, at one point, Bossk manages to kidnap and tie up Luke Skywalker himself; dragging him to the Jundland Wastes (of Tatooine) with a man named Jaxson. However, Skywalker eventually gains the upper hand and chops off several of Bossk's limbs with his lightsaber, allowing for a clean getaway. Luckily, being of a reptilian species, Bossk is able to grow back his missing arm and leg.

Bossk is also a long-time friend/foe of fan favorite character Boba Fett. The two actually first meet during the Clone Wars, in which they team up to hunt down the renowned Jedi Master Mace Windu. Boba would go on to help Bossk on a number of missions, as well as aiding him in the assault on his father's Bounty Hunters' Guild, before becoming his arch nemesis and main bounty hunting competition.

There are plenty of options to choose from for this one. Bossk could easily make an appearance in one of the next three "Star Wars" films, even if just for a brief cameo to gloat in an elderly Han Solo's face over the loss of his friend Chewbacca. Yet, Bossk could potentially have an even bigger part to play in either the "Boba Fett" or "Young Han Solo" spin-off films; acting as the main antagonist for either of them.