Sure, Justin Bieber had a #BadDay .. or two... in South America recently. He may have even gone after some paparazzi a few months back, and there was something in the news about a mop bucket, but that doesn't mean the 19-year-old is "All Bad."

Here are 19 reasons why you should be a Belieber:

1. He Started From The Bottom

Maybe that's Drake thing, but it's true. Bieber started off banging pots and pans until manager Scooter Braun found videos of him singing on YouTube. With a co-sign from Usher, the young Kidrauhl launched into stardom.

In three years, Bieber's had three major-label albums: My World 2.0 (his first, My World, came out in 2009 as an EP), Under the Mistletoe and Believe. Not to mention stripped-down projects like Believe Acoustic, and the new songs he's currently putting out every week under the umbrella of Music Mondays. He's been touring pretty much the entire time, and his second movie is ready to hit theaters on Christmas. Talk about busy.

When fans were waiting in the shivering cold and braving the blizzard Nemo to maybe see him perform and host on "Saturday Night Live" earlier this year, Bieber bought his fans some Ray's Pizza for the wait.

4. He Loves His Kid Brother And Sister

Jazmyn, 5, and Jaxon, 4, have gained celebrity through their brother, even getting Twitter accounts devoted to them. On Wednesday, the family celebrated Jaxon's 4th birthday. Look at them on vacation together!

5. He Helped Build A School In Guatemala

When he was in town for a concert, Bieber made a detour into the Guatemalan jungle to help out a community there. Afterward, he recorded a video about what he learned. The best part? He called the charity work "selfish" on his part. "It's the best selfishness possible because I'm doing this because it makes me happy," he said.

6. He Tweets At His Fans

Justin's Twitter and Instagram are feasts for the eyes (and soul). And since he updates his accounts on the daily, and it's not just promotion, there's an actual conversation going ... especially when he tweets, retweets, follows and even DMs them.

Not only does the guy sing, he can also dance, and anyone who's gone to his Believe Tour shows can attest.

8. He Can Play The Drums Too

Along with singing, Justin would post videos of him drumming. Now, he takes breaks in his concerts for drum solos.

9. He Formed A Relationship With Cancer Patient 'Mrs. Bieber'

On Valentine's Day 2012, Bieber visited 6-year-old Avalanna Routh, who was suffering from AT/RT (atypical teratoid rhabdoid tumor). He formed a relationship with her after the visit, taking her around New York City in June of that year. Avalanna died that year, but will forever be known as "Mrs. Bieber." 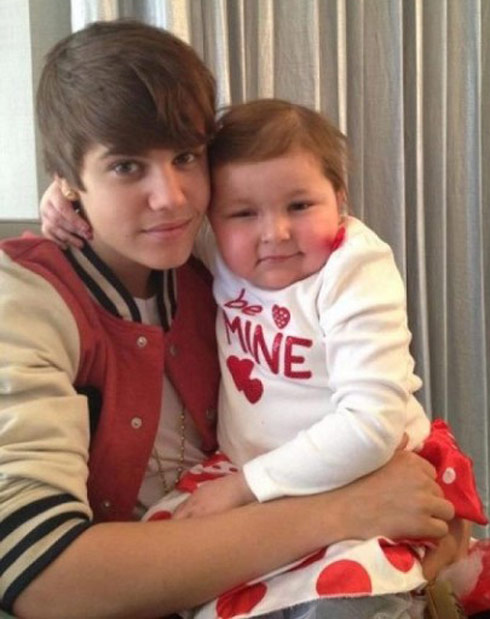 10. He Lets Fans Sneak Into His Concerts

Read one fan's story about how she snuck into a Justin concert and how she took this tweet as a sign. Who else does that?

"It's not me trying to act or pose in a certain way. It's a lifestyle -- like a suaveness or a swag, per se," he told the mag of his personal style. "But I don't really like to say the word ['swag'] anymore. It's kind of played out."

In the same THR article, it was revealed that Pastor Judah Smith texts him on the daily with customized scripture passages.

13. He Helped Out Tornado Victims

After deadly tornadoes swept over Oklahoma in July, Justin Bieber set aside a chunk of tickets for victims to go to his concert and have fun despite what happened.

we got OKC tonight. held 200 tickets for students from some of the schools recently destroyed. hope they enjoy the show

EVERY Monday! From "Heartbreaker" to, most recently, "P.Y.D." with R. Kelly, Biebs has put out new tracks for five weeks in a row, and there's five more expected in the future.

15. He Donates To Pencils Of Promise

Pencils of Promise, founded by Braun's brother Adam, helps build schools and create more opportunities for education. Justin donates a portion of his ticket sales to the charity. Way to go!

16. He's Homeys With Will Smith

Will Smith calls Bieber every week to check up on him, THR revealed. Braun said that the actor is JB's greatest mentor and they talk about any issues he might have. "He said, 'Man, that makes me feel so loved. I woke up, and there's Will Smith, one of, if not the, biggest movie stars on the planet,' " Braun recalled of what Bieber said of Smith. " 'He took time out of his day for me.' "

17. He Pokes Fun At Himself

In his episode of "SNL," he appeared in a skit called "The Miley Cyrus Show." He played Miley's #1 fan and compared the "Wrecking Ball" singer to Justin Bieber who, at the time, was dealing with backlash for smoking marijuana. "I heard he's really sorry and that we all make mistakes and that he'll never gonna do it again," Bieber said in character.

18. He Prays For The Philippines

It's rumored that the singer is going to put his graffiti skills to good use. Reports say that he will auction off his infamous spray cans to benefit the people who were affected by the typhoon earlier this month.

Working on something very special for the people in the Philippines. #giveback

After all this, if you can't appreciate the Biebs, maybe you can understand him on a physical level. On the inside, there's a philanthropic teen who just wants to eat McDonald's with Parisian fans and hang out with Will Smith, but if you're just judging from looks, well, Justin has that too.