There’s a scene at the beginning of Annie Hall where Alvy Singer casually mentions growing up a reasonably happy child. He insists he was never the morose type, but his remembrance betrays him: a flashback reveals a small redhead in black, thick-rimmed glasses declaring that the universe was expanding and that “one day it’ll break apart and be the end of everything.” It’s a wonderful bit of comedy that somehow failed to reach me despite my earliest memory, involving an extreme fear of trying on shoes at a shoe store, being similarly neurotic.

Had it not been for a few passing scenes from a profile on Woody Allen catching my eye months later, I probably would’ve written off over three decades worth of filmmaking without a second thought because of how little his 1977 Oscar winner connected with me at the time. But seeing a hypochondriac spiral into an existential crisis in "Hannah and Her Sisters" felt relatable, if a few years too late, and cracked open the door to a host of neurotic characters that remain endearing to this day. Sometimes, a foot in the door is all you need.

It’s taken close to seven years to find that same space to wedge myself into when looking through the advertising surrounding his more memorable films. For the longest time, my reaction wasn’t all that dissimilar to falling asleep in a chair. To someone with their nose stuck in art from post-war Europe, seeing black and white posters with few frills felt like uncovering one missed opportunity after another. I wanted posters that played host to vivid imagery that wore their humanity on their sleeve, not colorless rest-stops for text. Those desires are all well and good, but they miss the spirit of that bespeckled boy from Brooklyn that best comes through by doing more with less.

At first glance, one of the most visually distinguishable aspects of Woody Allen’s body of work rests with the title cards at the beginning of most of his films. The pattern is almost always the same: a black background with white lettering, set in Windsor Light Condensed. The credits are constructed and play out in a logic reminiscent of billing for a stage production, regardless of the picture. A crumbling relationship. A fictional character literally coming through the silver screen. Different stories bound together through a simple, straightforward approach designed to get the job done. An indifference to extravagance at the expense of time and effort, and instead an eye focused on what needs to be done to get not only the title-cards but an entire picture made. They are solutions without a need to appease the Gods of spectacle, an extension of the director’s personal philosophy.

Much of the advertising for Allen’s earlier films embodies this. The stories change, but a through-line exists from poster to poster that feels reminiscent of his approach to filmmaking. They spend less time interested in visual tricks or artistic flare, casting aside color in favor of the clarity offered by the contrast between black and white. While the posters themselves share certain stylistic practices of the period they were born out of (United Artist’s one-sheets for "Last Tango in Paris" and "The Passenger" reveal similar stylistic notes being played), taken in as a whole they reveal a distinct visual identity thoroughly appropriate for a director unconcerned with the seductions of style. Typography takes a more prominent role, with actor names highlighted more than what you’d find in your typical film poster, while the imagery used is often simple, with a single still photograph highlighting a mood or through a graphic symbol that brand’s a film’s identity. Lavishness is underplayed, with the few visual flourishes mostly being afforded to the film’s title.

Manhattan offers one of the most obvious yet elegant examples of this, with the typography doubling as the titular cityscape. Zelig takes a similar path, laying out shapeshifting letterforms that evoke its main character’s chameleon-like abilities. The posters themselves wind up feeling less like your typical, extravagant Hollywood affair and more akin to something out of the theatre while maintaining that distinct air of a Woody Allen affair. You can almost hear the jazz in the background.

Time’s change, though. There have been several posters since for his more contemporary films, many of which are rather sharp in their own right, yet few seem to channel their director’s spirit in quite the same way. Several have toyed with a less-as-more approach similar to their forefathers, and while the results stand out in our crowded visual landscape, they feel somewhat incomplete. The visual restraint is often there, but the jazz no longer appears to be playing in distance. Critics have made similar remarks about the films themselves as the years have stretched on, and maybe those missing qualities have had an effect on the one-sheets we’ve come to see. Whatever the case may be, I’m sure you’ll find me looking back on them in seven years, championing their unified ability in showcasing the renaissance of a bespeckled filmmaker from Brooklyn. That is if I’m already not somewhere else again babbling about a childhood fear of shoes..

Think of this as a bonus feature on a DVD: six obscure foreign posters for some Woody Allen classics. They march to the beat of a different drum, to say the least. 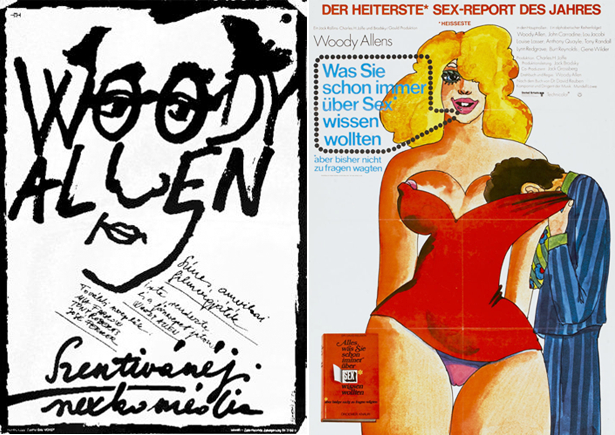 "A Midsummer Night’s Sex Comedy" (Budapest), Everything You Ever Wanted to Know About Sex (East Germany)

Read the previous installment of The Art House: American Summer Movie Posters vs. Their European Counterparts.