So, you might think the only thing you really need to know about "Man of Steel" star Henry Cavill is that he's a gorgeous dead ringer for the role of Superman, and, well, you're partially right about that.

But there's actually a lot of other nitty-grittiness worth learning about the British hunkster.

For example, if we may, did you know that the blue-eyed babe could've very easily wound up sporting a different sort of uniform altogether ... as a member of the British Army? Or that he has two middle names, one of which is Dalgliesh? Fancy!

Before you head out to see  Mr. Cavill saving school buses full of children and fighting an enraged Michael Shannon in theaters June 14, study up on these ten deets about the dude behind the non-mask and you'll be a Henry Cavill superfan faster than a speeding bullet.

Brace your socks, else they may be charmed right off.

1. His arm candy is tough as nails

First of all, sorry gals. He's totally spoken for. And by a girl who can literally kick someone's a** for getting fresh, no less.

Yep, Cavill — who'd previously been engaged to a show-jumper named Ellen Whitaker — is now with "Haywire" star-slash-b.a.m.f. Gina Carano, a former Muay Thai-style MMA fighter who won the vast majority of her bouts in the Octagon (7 outta 8, losing only to Cris 'Cyborg' Santos).

In case there's any lingering doubt whatsoever that the rumored Wonder Woman contender is the real deal, check out what happened to this poor gal Kaitlin Young when she took on the Crush — oh yeah, Carano was also an awesome American Gladiator called 'Crush' — back in '08.

You just gotta appreciate a man who gives respect to the very first lady in his life, and Henry Cavill is the type.

"My mother is such an incredibly strong woman," Cavill gushed of his mum, Marianne. "She raised a family of five boys extremely well. She made us all strong, loving, caring people. We all support each other. I’m really thankful to her."

Say it with us now: Awwwww!

3. He's one of five Cavill boys

As noted above, the 30-year-old stud is the second-to-youngest kid in the Cavill brood (his four brothers' names are Piers, Nik, Simon and Charlie), and his burgeoning fame has had something of an impact on the fam. Nik, a decorated Major in the Royal Marines, for instance, tends to catch a lotta flack from his unit for the cape-clad Henry. "Every time Major Cavill gives us a briefing we ask him, 'It is a bird or is it a plane?' ... We ask him if he has Superman on call if things don't go to plan out here," one Marine told The Sun. Oh, the hilarious woes of famous siblingry.

4. His star's been on the almost rise for a while

Henry Cavill screen-tested for the big reinvention of Bond, James Bond back in '05 for "Casino Royale" ... 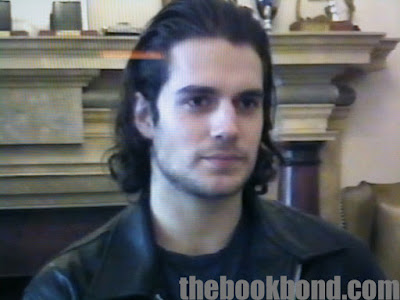 ... and while he was on the very, very short list, the role ended up belonging to Daniel Craig.

It wasn't the only time Cavill was this stinking close to a potentially star-maker role. In fact, fellow Brit Robert Pattinson snagged up not one but two parts which had Cavill's name all over them (before "Harry Potter and the Goblet of Fire," there were some Potterheads outright petitioning for Cavill as Cedric Diggory, and "Twilight" scribe Stephenie Meyer only had eyes for Cavill as her Edward Cullen*).

And before any of that (and as a nice little bookend to the near-misses portion of his career), Cavill lost the part of Superman back in '04 when McG's "Superman: Flyby" was dropped and later picked up by Bryan Singer, transformed into "Superman Returns" and starring Brandon Routh instead. As a nugget for the number fiends, "Superman Returns" did a modest $200m domestic on a $270m budget; "Man of Steel" is tracking to score $300m on a $175m production budget.

Note: Cavill has openly dismissed rumors that he'd ever auditioned for Batman in Christopher Nolan's "The Dark Knight" trilogy.

* He's now a fan-favorite for Christian Grey in the "Twilight" fanfic-turned-phenom "Fifty Shades of Grey."

Even before becoming the world-hopping Kal-El, Henry Cavill had already seen his fair share of cool places.

Thanks to all that global experience, he can speak French fluently and also hold it down in German and Italian. Mas oui!

6. He wasn't always such a muscle man

... That or he's just exceptionally humble about his youth.

Thanks to the disaster that was Colin Farrell's "Alexander," Cavill's career belt might include yet another shoulda-woulda-coulda notch. His dream role, he once said, is Alexander the Great, who he's "always had a soft spot for." But, as he acknowledged, "It'll be years before anybody tries that again ..." What a cryin' shame.

Henry Cavill's favorite movie is "Gladiator," which totally explains what was going on with him in Tarsem Singh's "Immortals."

9. He auditioned in costume

To up his chances, Henry Cavill showed up to the "Man of Steel" audition in costume. And while it took a 5,000 calories-per-day diet to get him into peak physical condition for the big screen, per director Zack Snyder, "He walked out, and no one laughed …"

"Other actors put that suit on, and it's a joke, even if they're great actors," Snyder added. "Henry put it on, and he exuded this kind of crazy-calm confidence that just made me go 'Wow. Okay: This was Superman.'"

After winning back his part as Big Blue, Henry Cavill celebrated the way any comic book geek would ... by putting his nose right into the pages.

"As soon as I hung up, I was leaping up and down and running up and down the stairs and roaring and shouting, and then trying to call everyone but no one was answering their phones. My smile was absolutely enormous," he told Daily Record.