Apart from putting Alice Eve's rockin' abs on full display, what was the point of that skivvy scene in "Star Trek Into Darkness"?

It had to have a point right? 'Cause, you know, they put it in the trailer and used it for their little poster link scavenger hunt thingymajig in addition to including it in the movie and all...

It's a totally debatable issue, considering it's a throwaway cut-away in the film, but even writer-producer Damon Lindelof has decided to cry "uncle" and now admits to regretting the scene in question, nerdy lust points earned notwithstanding.

In a series of tweets yesterday, Lindelof wrote of his acceptance that the scene was "gratuitous" and might be construed as "misogynistic." (However, he also quickly made mention of the fact that there were shirtless Chris Pine scenes in both "Star Trek" movie installments).

Zoe Saldana also had an underwear scene in the first installment, but as the folks at Den of Geek pointed out, "there was a sense it was at least something to do with something. With Carol Marcus, can you say the same thing?"

Aside from the awesome "Sponge Bob" GIF-ery which followed, obviously ... ... there's another argument that makes at least a tinge of sense.

In the comments to DoG's blasty post, a self-proclaimed "informed watcher" declared that Eve's underoo display indeed laid the foundation for some sexy interactions between Captain Kirk and Dr. Carol Marcus.

"Anyone who remembers the original films can tell you her character is the future mother of Kirk's child from the wrath of Kahn. The scene is an Easter egg of sorts giving fans a tease of what's in store for the future. The scene fits right in with the obvious attraction Kirk feels when he first meets her in the shuttle, and the consideration he gives her later during the films climax," the commentator wrote. "Of course if you insist on taking the scene in question completely out of context than of course it doesn't make sense and seems completely unnecessary. As someone who actually knows what's going on in the overall narrative I felt that it was short enough to not seem gratuitous, but long enough to establish her character to be on equal footing with the infamous Star Fleet ladies man. She's completely comfortable in her own skin and confident enough to throw James T Kirk off his game. A man who has shown to bed not one, but two females of any species at a time."

That was a lot more poetic than what Lindelof himself had said before to MTV: "Why is Alice Eve in her underwear, gratuitously and unnecessarily, without any real effort made as to why in God's name she would undress in that circumstance? Well there's a very good answer for that. But I'm not telling you what it is. Because... uh... MYSTERY?"

Even Alice Eve sorta fumbled through with a non-answer about donning her bra during an interview with StarTrek.com. She said, "There is sexuality throughout the movie. Chris comes in in a very skin-tight suit and you… can see him. He has his top off at the beginning. Benedict [Cumberbatch] did a shower scene that wasn't in the movie. I think that to ignore an element of sexuality is to ignore an element of humanity." 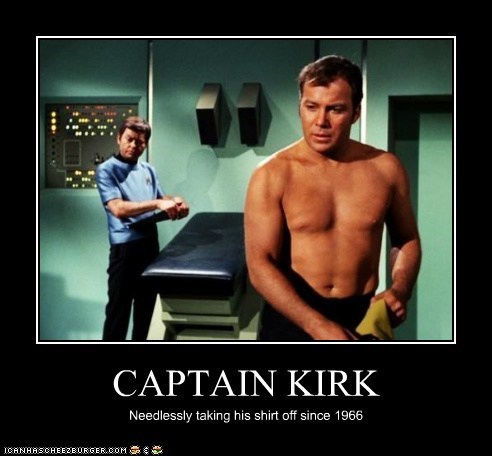