Ever since "Harry Potter" made its big screen debut 12 years ago and started on its way to becoming the highest grossing films series of all time, every studio in Hollywood has been hard at work trying to find the next series of fantasy novels to adapt for the big screen. From "The Golden Compass" to "The Mortal Instruments" to "Percy Jackson ," no stone has gone un-turned in the quest for the magic ticket to box office fortune.

But for Disney, it turns out the answer may have been right under their nose the whole time, as the studio is (in a surprising turn of Tinseltown events) teaming up with The Weinstein Company to adapt Disney Publishing's bestselling "Artemis Fowl" series.

Written by Irish author Eion Colfer, "Artemis Fowl" tells the story of a 12-year-old criminal mastermind who uses his genius to prove the existence of fairies, which he then promptly captures and holds hostage for a ransom in gold. As the series progresses and Artemis becomes increasingly involved in the world of magic, he slowly undergoes a transformation from crook to hero.

"With its balance of mystery, adventure and family appeal, 'Artemis Fowl' is a natural fit for Disney," Disney Studios prez Sean Bailey said of the news. "We're looking forward to collaborating with Harvey on this exciting project."

Meanwhile, Weinstein kept it real in his statement, admitting, "If you would have told me five years ago I would be producing a project with Disney I would have thought you were crazy. I feel as though everything is coming full circle considering Bob De Niro and Jane Rosenthal brought me this book while I was still at Miramax and within hours I told them I wanted the rights to the film." Yeah, he totally "Bob"-ed the Robert De Niro just then.

"This is a special project for me because my children absolutely love this book," Weinstein added. "This story is for everyone and there is no one better than Disney to make a film that will excite people young and old." 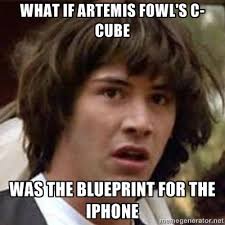