Steven Yeun has a thing for comic books about weird eating habits.

The actor stars on "The Walking Dead" as Glenn Rhee, the former pizza delivery guy who has been with Rick and Carl Grimes since the earliest days of the zombie apocalypse. These days, he's stuck in a train car in Terminus, positioned to become the next meal for a group of cannibals — an ironic twist of fate, given the flesh-hungry, walker-infested world he already lives in.

But "Walking Dead" isn't the end-all be-all when it comes to Yeun and food-driven comics fare. He's now set to provide the voice for the lead character on "Chew," the upcoming animated adaptation of the comic book from John Layman and Rob Guillory. 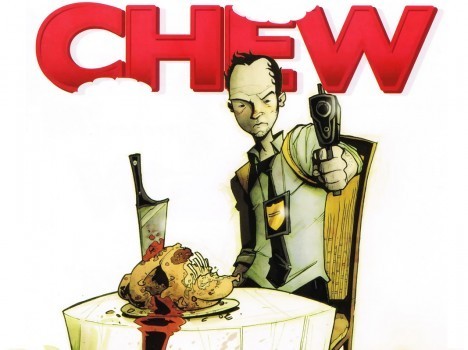 "Chew" centers on Tony Chu, a detective and operative for the Food and Drug Administration. He works in a world where chickens have been outlawed thanks to a deadly bird flu. Not that he'd be chomping on chicken to begin with; Chu is a "cibopath," which means that he gleans psychic impressions from anything and everything he eats, except beets.

In other words, if Tony eats an apple, he can tell you exactly where that apple has come from and what it's been through. If he eats a steak, he can see what kind of life the cow lived before winding up as a medium-rare delicacy.

And if he takes a bite out of a corpse? Murder mystery solved.

In addition to Yeun, "The Guild" star Felicia Day has been hired to play Tony's love interest, Amelia Mintz, a food critic and "saboscrivner" who writes so vividly about food that readers can literally taste what she's describing.

The animated "Chew" comes courtesy of director Jeff Krelitz, with an eye to release the feature digitally and as a home entertainment release, according to The Hollywood Reporter. There's no word on other actors who are signing aboard "Chew," but there's a wide range of amazing characters in Layman and Guillory's story.

If we can toss out one suggestion: Yeun should bring his "Walking Dead" pal Norman Reedus aboard as Chu's partner, John Colby. Universe, make it happen.

Are you looking forward to "Chew," now that Yeun and Day are on board?