I like "Marvel's Agents of S.H.I.E.L.D.," now more than ever. Interesting things are happening on the series. Two of the S.H.I.E.L.D. members have died (or borderline died) and subsequently been resurrected by mysterious serums mined from giant blue alien-ish creatures that appear to be Frost Giants. That does not suck.

Plus, with "Captain America: The Winter Soldier" coming up, there's inevitable fallout hitting S.H.I.E.L.D. in the coming weeks, too. Double plus, there's Bill Paxton and the coming arrival of Adrian Pasdar. Triple plus, there's the fact that Deathlok is already here. All good things, right?

Well, maybe not the last one.

New images from an upcoming episode of "S.H.I.E.L.D.," titled "End of the Beginning," have arrived online, giving us our best look yet at what disfigured ex-agent Mike Peterson looks like as the cybernetic Deathlok. Spoiler alert: It ain't pretty, and not in the right way. Avert your eyes now if you don't want to see.

Seriously, go away if you want to wait to see him when the episode premieres in two weeks. Because here he is:

As our friends from a different sci-fi show might respond: "What the frak?"

We've already seen that Deathlok is assembling himself piece by piece. He has the eye implant courtesy of the technology first introduced through Akela Amador in "Eye-Spy." He has the bionic leg as seen in the Skye-falling "T.R.A.C.K.S." Now, it looks like he'll have some wrist- and chest-mounted support by the time "End of the Beginning" airs on April 1.

(Yes, it's another two weeks until a new "S.H.I.E.L.D." arrives. On the bright side, Marvel airs a brand-new special, "Assembling a Universe," Tuesday night (March 18), and it's all about the movies.)

But aside from the fact that Peterson is receiving patchwork cybernetic upgrades, and that the technology he sports falls under the "Deathlok program" label, does he really resemble the Deathlok from the comics? Not ... not really, no. Here, see for yourself: 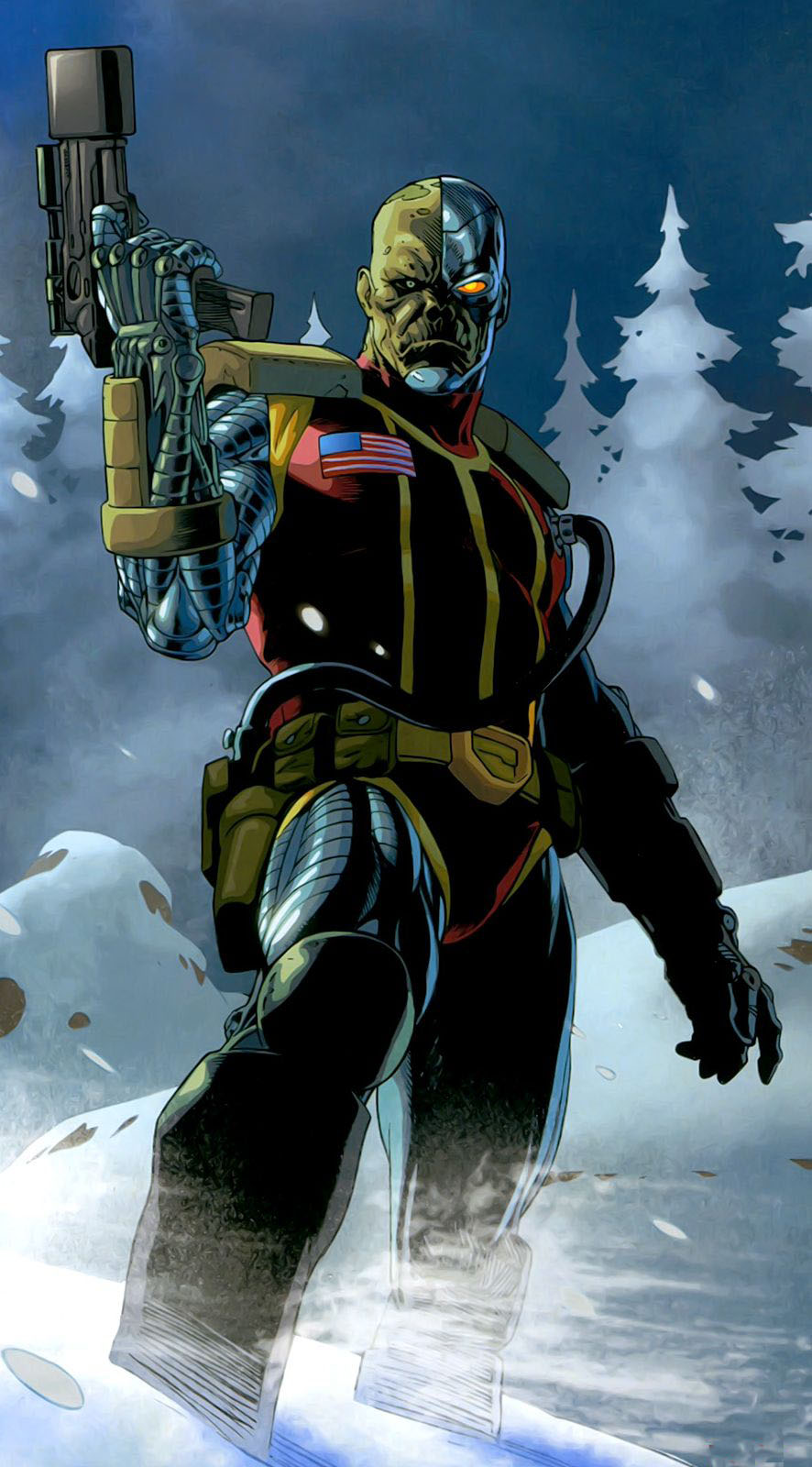 TV Deathlok can't make the same Zoolanderish brag, by the look of it. As it stands, he's just Mike Peterson, with some Diet Deathlok armor strapped to his old S.H.I.E.L.D. uniform. (He should probably take that uniform to the dry cleaner by now, too. He's been wearing it for a while!)

In the show's defense, the comic book Deathlok isn't an easy image to pull off in live-action. It could work in higher-budget movie world, but perhaps it's too difficult to faithfully render on television. Or, perhaps the show is just really building up to the full-on Deathlok reveal — in which case, I think the show did itself a disservice by announcing the Deathlok twist so soon; a lot of goodwill hinges on the proper execution of this character.

Given how much I've enjoyed the series in recent weeks, I'm willing to give this a shot. Still, even I, a staunch "S.H.I.E.L.D." supporter, can't help but feel a little nervous looking at what appears to be the Marvel Cinematic Universe's version of Deathlok.

What do you think of the new look at J. August Richards as Deathlok?