Britney Spears has said that her December 3 album release, Britney Jean will be her "most personal record," and that seems to apply to the artwork, which Britney released on Friday (October 25).

The black-and-white art features the singer topless, with a close-up mostly on her shoulders and face. Across the front of the photo is the album's title in blue neon with a pink neon heart around it. There is very little to distract fans from the artist herself.

The same day she released the art, she also wrote a letter to her fans, revealing a bit more about the album's meaning. 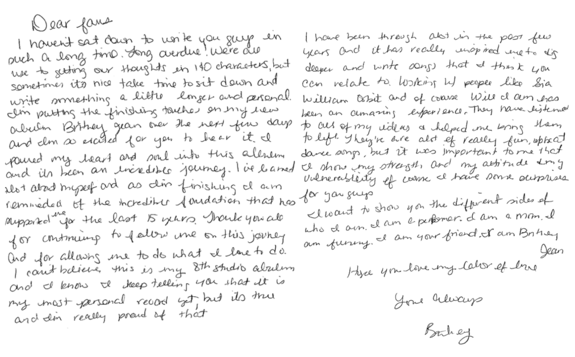 "I poured my heart and soul into this album, and it's been an incredible journey. I've learned a lot about myself, and as I am finishing, I am reminded of the incredible foundation that has supported me for the last 15 years," she wrote in the handwritten letter. "I can't believe this is my eighth studio album and I know I keep telling you that it is my most personal record yet, but it's true and I'm really proud of that."

The album's release will come just weeks before the "Work Bitch" singer is slated to take the stage in Las Vegas for her two-year residency, "Britney: Piece of Me," at Planet Hollywood on December 27.

In her post Friday, she also thanked many of the folks who helped her work on the album. "I have been through a lot in the past few years and it has really inspired me to dig deeper and write songs that I think everyone can relate to. Working with people like Sia, William Orbit, and of course will.i.am has been an amazing experience. They have listened to all of my ideas and helped me bring them to life," she said. "There are a lot of really fun, upbeat dance songs, but it was important to me that I show my strength, and my attitude, and my vulnerability. Of course, I also have some surprises for you guys."

The announcement also revealed that "Perfume," a ballad she had previously described as "really beautiful," will be available on November 5. According to Billboard, the track might be Spears' next single.