Long before we heard "Roar," before Katy Perry took on the VMAs and before we even knew she had a new album on the way, a giant, golden semi-truck started the singer's new era.

With its shiny metallic walls and the words "KATY PERRY · PRISM ·Prism could mean new music from Katy. It did, and we got "Roar" as the first single and word that Perry would be collaborating with boyfriend John Mayer on his album, Paradise Valley, released August 20.

Now, with Mayer's album already out, and Perry's still on the way, it looks like our favorite "Wildfire" singer is taking a page from Katy's promotional playbook. In a picture he posted on Facebook, fans can get a look at his giant semi — plastered with album imagery, a photo of John looking forlornly into a cloudy valley, mountains rising on either side.

"Off this week and then next up is South America!! Are you ready for JM??" the caption read. Then it used the hashtag #MAYERISBACK, a tad ironic since he doesn't own a Twitter handle.

We realize that Mayer is probably the biggest Katy Cat out there, but does that mean he's turning into a Copy Cat? 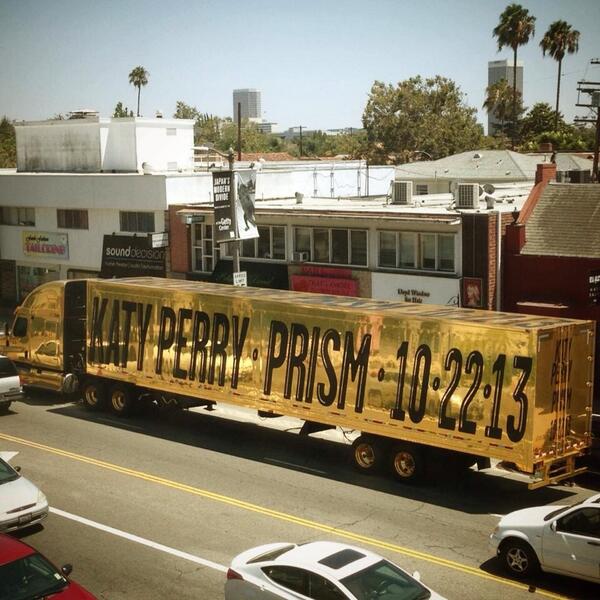 Perry's 18-wheeler made its way across the U.S. before landing in New York City, when Katy emerged from the back to a group of fans. Along its trek, the semi was spotted in several different states, and even got a little bashed up when it was hit in a Wal-Mart parking lot.

Will we see John Mayer's pretty semi on the road? Will John himself jump out from the back, surprising everyone at this first Argentina show on Monday? Is it even possible to drive from the U.S. to Argentina? Google isn't giving us conclusive info!

We have a lot of questions, but Mayer's rep said to MTV News: "It's just an album billboard."

Mayer will tour South America before heading north to finish up his fall dates in the states, ending the trek in Brooklyn's Barclays Center.